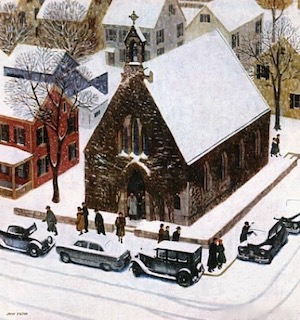 The history of Trinity Episcopal Church is closely connected with the development of the city of Atchison, the state of Kansas and the Episocal Diocese of Kansas. Older than the Diocese of Kansas of which it is a part, Trinity is one of the oldest church organizations in the area.

First organized in 1857 by a small group of Episcopalians, with the assistance of the Philadelphia Society for Missions in the West, the parish was originally named the Church of St. Mary Magdalene.  Before a building was constructed, the parish met and held services in various places:  homes, the old courthouse, and in the parlors of the Presbyterian and Methodist churches.

Among the early organizers were the grandparents and great grandmother of Amelia Earhart. Amelia’s grandparents, Judge Alfred and Amelia Otis, were early Atchison residents and founding members of Trinity Church.

Disagreements among residents in the territory of Kansas about the question of slavery were felt at the parish. This original congregation divided in 1859. Several members left to form a new parish called Grace Church.  This new parish, however, did not survive. The members returned to St. Mary Magdalene, and the parish was reorganized as Trinity Episcopal Church in 1859.

In 1864, Trinity Parish hosted the Fifth Annual Convention of the Episcopal Diocese of Kansas.  It was at this convention where Thomas Hubbard Vail was elected as the first Episcopal Bishop of Kansas.  He also accepted an invitation to serve as Rector of Trinity Church. He then served as both rector of the parish and Bishop of the Diocese.

Over the years, a number of distinguished clergy have served at Trinity Church. Three of Trinity’s rectors were nominated and elected as bishops to the episcopate.  One rector, Rev. John Henry Hopkins, composed the hymn, “I Sing a Song of the Saints of God,” which is included in the most current hymnal of the Episcopal Church.

Plans for the present building, on which construction was first begun in 1860, were drawn by an architect, Richard Upjohn. Upjohn was the architect of famous Trinity Church at the head of Wall Street in lower New York City, one of the most famous Episcopal churches in America.

Trinity Episcopal’s current church was designed by architect James C. Sidney in 1866. The design of the building was based on the architecture of Calvary Church in Stonington, CT. One of the thorn shrubs in the church garden was transplanted from the church in Stonington. The original shrub supposedly came from the staff of Joseph of Arimathea which he drove into the ground at Glastonbury, England when he took the Holy Grail to England.

It had been planned to use pine lumber imported from the east in the construction.  It was $100 per 1,000 feet, while the lumber of the region was $40 per 1,000 feet, so the decision was reached to use the latter – – black walnut. Timbers, joists, beams, rafters; walnut used for all of them.

The slate for the roof was a gift from the father of a member who owned a quarry in Vermont.  The only cost to the parish for this splendid roof was the shipping charges.

Construction of a new building for the parish was completed in 1868.  Services in the new building were first held March 15, 1868.  The following year the black walnut pews were placed, and on May 22, 1869, the church was consecrated.

The connecting parish house was begun in 1894 and completed in 1905.  It was completely renovated and remodeled in 1955.

Trinity Episcopal Church was listed on the National Register of Historic Places in 1985.

All windows, the altar, organ, pulpit, and other furnishings have been given as memorials.  Plaques throughout the church mark these, and each window is marked in the glass.  Note particularly the oldest window located on the east wall in the north end of the church.

It is not only interesting because of its antiquity but because of the Atchison is misspelled “Atchinson”.

The Italian marble altar is considered unusual and was installed in the early part of this century.  The original altar was walnut.

The brass altar rail and pulpit are also noteworthy.

The first pipe organ in Trinity Church was a small tracker organ of unknown manufacture which was to some extent, at least, portable.  Nothing is now known about this instrument except that if had to be pumped by hand by the Sexton who was known to doze during long sermons and who had to be awakened from time to time.  In 1913 this tracker organ was replaced with an electro-pneumatic divided instrument of twenty-two ranks made by Hall Organ Company.

The Hall Organ was, in turn, replaced after sixty years of service with the present instrument in 1973.  Designed by Ernest White especially for this building with the needs of Anglican service music in mind, the organ was built by the Moller Company of Hagerstown, Maryland.  The organ is of seventeen ranks with two manuals and pedals and was voiced by Mr. White himself.  There are also twenty-one Deagan tublar chimes installed in the organ case and played by means of an organ stop.  The brilliant sound of this classical instrument has caused it to become noteworthy among musicians as one of the finest organs in the Mid-west.

In 1860 Trinity Church received two Victorian chalices, a stand paten and a large flagon as gifts from the Church of the Mediator, Philadelphia, which at that time had a program of supplying Communion vessels to the struggling missions in the American West.  In the latter part of the last century these silver plate vessels were replaced with others of a finer quality.  The old vessels were given to the Episcopal Diocese of Kansas for use in its missionary work.

In 1976, these for Communion vessels were discovered in an attic in Lawrence, Kansas, by the grandson of an Archdeacon who had served in the Diocese in the 1890’s.  Subsequently they were returned to Trinity Church and were used once again in this Church for the Bicentennial Eucharist on July 4, 1976.