As constituent members of the Anglican Communion in the United States, we are descendants of and partners with the Church of England and the Scottish Episcopal Church, and are part of the third largest group of Christians in the world.

We believe in following the teachings of Jesus Christ, whose life, death, and resurrection saved the world.

We have a legacy of inclusion, aspiring to tell and exemplify God’s love for every human being; women and men serve as bishops, priests, and deacons in our church. Laypeople and clergy cooperate as leaders at all levels of our church.

Leadership is a gift from God, and can be expressed by all people in our church, regardless of sexual identity or orientation.

We believe that God loves you – no exceptions.

What makes us Episcopalians?

There is great breadth of diversity in the Episcopal Church: we might be Anglo-Catholic, Evangelical, Charismatic, conservative or liberal. But Episcopalians are first and foremost Christians. We believe God has created us, and we proclaim and follow Jesus as Lord. We believe God is active in our day-to-day lives through the power of the Holy Spirit.

The church is the body of which Christ is the head and all baptized people are the members. The church is a community of faith and commitment, not an organization like a club. We are part of the Anglican Communion, a fellowship of autonomous churches in communion with the Church of England.

All Anglican churches are drawn together by a common loyalty to:

In worship, Episcopalians sit, kneel, stand, sing, pray aloud and pray silently. Some bow and make the sign of the cross; others don’t.

We use the Book of Common Prayer, The Hymnal and a service bulletin. These tools are designed to help us worship and pray together, something very important to Anglican Christians.

Episcopal worship calls for the full participation of all the people. The Prayer Book (and the service bulletin) will guide you in what to do and what to say or sing. Our people are friendly and helpful. If you need help during the service, please ask someone for guidance.

About the Diocese of Kansas

A diocese is the geographic area overseen by a bishop. The word “episcopal” comes from the Greek word for bishop, meaning an overseer.

The Episcopal Diocese of Kansas includes more than 8,500 members in 44 congregations as well as two social service agencies.

The diocese covers the eastern 40 percent of the state of Kansas, extending as far west as Abilene and Wichita. It also includes the cities of Topeka, Lawrence, Manhattan and the entire Kansas City metropolitan area on the Kansas side of the state line.

The diocese also includes a great part of one the geological wonders of the Midwest – the Flint Hills, a unique area of tallgrass prairie that features a rolling landscape stretching almost the width of the state and into northern Oklahoma.

Our diocese is one of 111 dioceses in the Episcopal Church, which has a membership of about 2 million people in the United States and 17 other countries. We’re also part of the Anglican Communion, joining us with some 70 million people in more than 160 countries who trace their lineage to the Church of England. 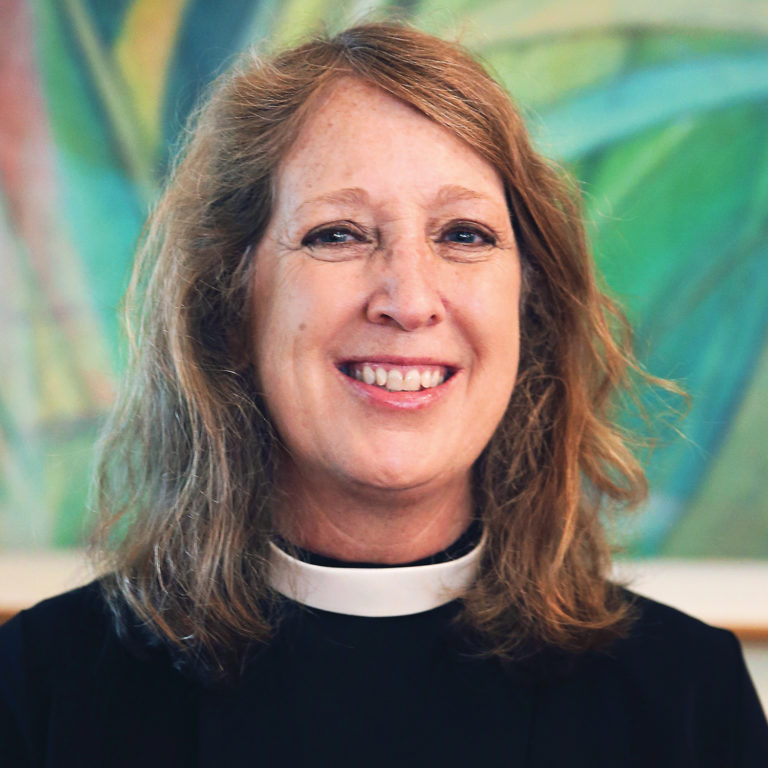 About the Bishop of Kansas

The Right Reverend Cathleen Chittenden Bascom, D.Min., was ordained and consecrated as the 10th bishop of the Episcopal Diocese of Kansas on Saturday, March 2, 2019, in Grace Cathedral, Topeka. The chief consecrator was Episcopal Church Presiding Bishop Michael Curry. Bishop Alan Scarfe of Iowa was the preacher.

She is the first woman to serve as bishop of the diocese.

Bishop Cathleen grew up in Denver, Colo. She earned a B.A. in English with distinction from the University of Kansas in 1984 and an M.A. in Modern Literature from Exeter University (UK) in 1991. She earned her M.Div. at Seabury-Western in 1990 and a Doctor of Ministry in Preaching from Iliff School of Theology in Denver in 2005. In 2017 she completed an MFA in Creative Writing and Environment at Iowa State University.

She had a faith experience that was nurtured at the Canterbury House and Trinity Episcopal Church in Lawrence, where she explored a call to ordination. After seminary she served as curate for three years at St. Gregory’s in Deerfield, Ill. She then returned to Kansas to help replant campus ministry at K-State, Washburn and Wichita State from 1993-2001, where she initiated the purchase of the St. Francis Canterbury House in Manhattan.

She then served from 2001-2007 as rector of St. Stephen’s, Newton, Iowa. From 2007-2014 she was dean of the Cathedral Church of St. Paul in Des Moines. As well as healing internal divisions, she and the cathedral were named Urban Stewards of the Year by Polk County for the installation of an urban prairie green-space.

Bishop Cathleen served as Assistant Professor of Religion at Waldorf University, a liberal arts college with Lutheran roots, from 2014 through 2018. While there she also was supply priest and team coach at Trinity, Emmetsburg, and oversaw Iowa Creation Stewards, helping parishes plant postage stamp prairies and organize around environmental concerns.

In 2018 she was named to a three-year term on the Episcopal Church’s Task Force on Care of Creation and Environmental Racism.

She also is the author of a novel, Of Green Stuff Woven, produced by Light Messages Publishing.

She is married to Tim Bascom, and they have two adult sons, Conrad and Luke. Bishop Cathleen likes to garden, cross country ski, travel, and enjoy the blessings of family and friends.